Special guest of the American Center 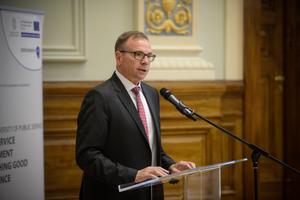 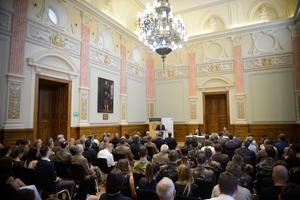 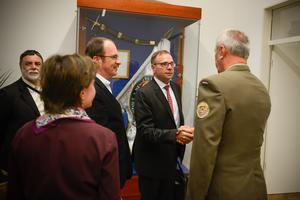 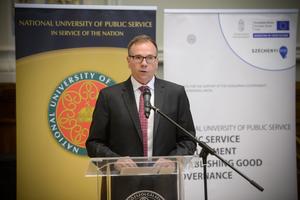 US Army retired Lieutenant General Frederick Benjamin Hodges accepted the invitation of the American Studies Research Center and gave a presentation on May 7 at the National University of Public Service. He held a presentation for university members and military professionals under the title „Current political and military issues concerning Eastern Europe and Russia”.

Lt. General Hodges was born in Quincy, Florida in 1958. He graduated from the United States Military Academy in 1980 and was commissioned in the Infantry. His first assignment was in Germany as an Infantry Lieutenant. In Germany he commanded Infantry units at the 101st Airborne Division and in Operation Iraqi Freedom, after that he served in Afghanistan as a Director of Operations. Later he served in a variety of Joint and Army Staff positions like Chief of Plans, 2nd Infantry Division in Korea; Aide-de-Camp to the Supreme Allied Commander Europe; Director of the Pakistan Afghanistan Coordination Cell on the Joint Staff and Chief of Legislative Liaison for the US Army. His last assignment was from 2012 to 2014 as Commander in NATO Allied Land Command. He currently holds the Pershing Chair in Strategic Studies at the Center for European Policy Analysis (CEPA).

​Before his presentation at the National University of Public Service, General Hodges met with Prof. Dr. András Patyi rector of the University, with Dr. Tamás Fellegi strategic director of the American Studies Research Center and other leadership members of NUPS. After a short discussion with NUPS representatives he held his lecture for invited researchers, lecturers and high ranked military officers. The key issues of his presentation were the importance of Central and Eastern Europe, military issues and cooperation in the region as well as current political changes. After his interesting presentation General Hodges was open to answer questions coming from the audience.