Information as a weapon 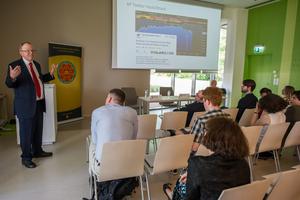 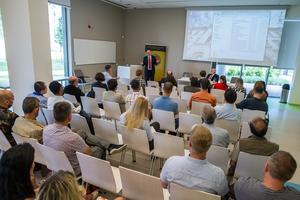 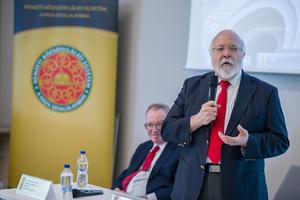 Dr. Rand Waltzman, who is a senior research fellow at RAND Corporation and DARPA gave a lecture on Thursday at the National University of Public Service by invitation of American Studies Research Center and the US Embassy. Dr. Waltzman is a mathematician and IT specialist, whose research area is focusing primarily on changes of the information warfare and mass media, and their modeling. He gave a presentation under the title: „The truth is out there – or is it? And what do you do if it isn’t?” which pointed out the importance of using information as a weapon, the background of how to create such things and finding solutions to protect ourselves from such information.

According to Dr. Waltzman the technological development is fast, but the human psyche and behavior is basically unchanged. The creation and operation of new information technologies are difficult, but their usage is terribly easy and their effect can be excessively devastating. Waltzman described the process as „the democratization of weapons of mass destruction”. According to him the most serious danger nowadays is that one can „put anything in your mouth” with using the right softwares. These softwares are – compared to their effect – very cheap and easily available for everyone. In this situation the most dangerous when it is not a complete lie, but just partial truths or content that people want to hear, which justify their fears and desires. The most professional method – said by Waltzman – is when they create an environment where fake news are completely believable, moreover fake news seem logical. Dr. Waltzman showed several examples to the audience, each of them had a common feature, they started from a real event. As Waltzman said people can be misled not just with fake news, fake videos but with news taken out from their original context. His example was a video about the newly inaugurated president Donald Trump and the First Lady when they met the prime minister of Poland and his wife. The video – what spread quickly all over the world – showed that the wife of Poland’s prime minister doesn’t accept Donald Trump’s handshake, instead she welcomes Melania Trump and the edited video ends here. Dr. Waltzman showed the original, unedited video to the audience: the prime minister’s wife firstly welcomes the First Lady, then she shakes hands with Donald Trump – as the Polish protocol specify it. The original video did not reach as many people as the edited one. Moreover, the makers of the edited video suspected that the general public do not know the relevant rules of the Polish protocol. Some frames cutting of the original video, taken out from its original context can be a base to mock the already unpopular president.

Another successfully used method is fact changing. An outstansding example for this – according to Waltzman – connects to the Operation Walhalla of the US Army in 2006. The soldiers task was to eliminate a previously detected rebel group and its leader in Iraq. The operation was a success, but during the 55 minutes while the soldiers got back to the base the situation changed radically. Some Iraqi survivors of the raid rearranged the spot like the Americans would have been massacred civilians. This news on the internet spread all over the world only within 35 minutes, so the soldiers who were in the operation couldn’t get back in time to the base to report what happened. It took days for the US Army to detect what happened exactly and the American government had to explain a situation for month, what actually did not happen. Some Iraqi survivors have managed to cause enormous damage to the Americans with very little investment and risk. This case highlighted that the internet, which is the most important platform of freedom and independence of the western values, can change very quickly and dynamically. To follow, turn back these changes is a hard and very slow process. “Nowadays the winning on the informational and cyber battlefield is more important and rewardable than on the classical battlefield.” – said Dr. Waltzman. Waltzman states that Russians and Chinese soon realized this and gained serious success. Russians had raised the importance of the information warfare to theoretical level years ago through the Gerasimov doctrine. The Chinese have developed a social credit system to perfection. Its essence that the users voluntarily share information about themselves to the Chinese government, because they believe it guarantees their safety. Moreover, the Chinese government has a base of 2 million people, whose job is to monitor the internet in every hour and if they perceive an undesirable discussion topic their job to move the conversation to elsewhere. The Communist Party in China has youth organization, where more then 10 million volunteers are available for this job. At the end of the lecture, dr. Waltzman talked about the possible protection against disinformation. He stated that the most effective defense mode is when we have a critical way of thinking and we are trying to get know other cultures and societies.